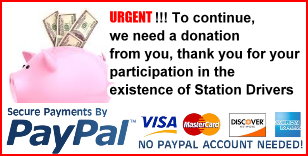 GeForce Hotfix display driver version 461.33 is based on our latest Game Ready Driver 461.09 .

GeForce Hotfix display driver version 461.51 is based on our latest Game Ready Driver 461.40 .

The hotfix addresses the following issues :

Wallpaper Engine app may crash on startup or upon resume from sleep. [3208963]

Game Ready Drivers provide the best possible gaming experience for all major new releases. Prior to a new title launching, our driver team is working up until the last minute to ensure every performance tweak and bug fix is included for the best gameplay on day-1.

New Features and Other Changes :

Changes and Fixed Issues in Version 461.72
The following sections list the important changes and the most common issues resolved in this
version. This list is only a subset of the total number of changes made in this driver version. The
NVIDIA bug number is provided for reference.

Fixed Issues in this Release :

 Wallpaper Engine app may crash on startup or upon resume from sleep. [3208963]

 Several desktop applications flicker when Vertical Sync is set to the default “Use the 3D
application setting”. [3252186]

 Some desktop applications may flicker or stutter when resizing the window on some PC
configurations [3252200].
See the NVIDIA KBA 5157 for a possible workaround.

 [GeForce GTX 1660 SUPER] : Random flickering may appear across the top of the monitor on
some PC configurations. [3184254]

 [World of Warcraft: Shadowlands] : Random flicker may occur in certain locations in the game
[3206341]

 [Steam VR game] : Stuttering and lagging occur upon launching a game while any GPU
hardware monitoring tool is running in the background. [3152190]

However, the GeForce RTX 3060 GPU has a special feature, as it is theoretically the first in the 30 Series desktop to support the Resizable BAR feature of the PCI Express standard, which is expected to improve performance in some games.

However, NVIDIA does not talk about this innovation in the changelog of the 461.72 driver but confirms on its website nvidia.com/geforce that this 461.72 driver supports the Resizable BAR with the GeForce RTX 3060 card.

As a reminder, the support of the Resizable BAR in the GeForce driver is not enough since it must also be the case in the BIOS of the graphics card. The GeBIorce RTX 3060's vBIOS natively incorporates this feature, but the 3060 Ti / 3070/3080/3090 GPUs will receive an update to their vBIOS in late March. This BIOS will also remove the beeps at startup. You will also need to think about updating the BIOS / UEFI of the motherboard.

NVIDIA confirms that this BIOS with Resizable BAR will be available for both GeForce RTX 30 Series Founders Edition home graphics cards and those offered by the various partners (OEMs). So it will be to our knowledge for the first time that NVIDIA will offer a new BIOS for Founders Edition cards which it has always refused to do in the past. This BIOS will be directly downloadable from the NVIDIA website.

Support for the first HX CMP GPUs dedicated to mining :

In addition to the GeForce RTX 3060 GPU, these drivers also provide support for the very first CMP HX GPUs dedicated exclusively to professional mining as the cards will be devoid of video output. This new line of GPU Cryptocurrency Mining Processor aims to completely split the products used to mine cryptocurrency from those intended for gamers, which should improve the availability of graphics cards in commerce and prevent miners from getting their hands on whole batches of GeForce which has totally destabilized the market in recent years.

To prevent future GeForce cards (including the new RTX 3060) from being used for mining purposes, NVIDIA announces that their performance for this use will be curbed at half the maximum Hash Rate via the BIOS and driver that will detect Ethereum protocol algorithms.

In addition, NVIDIA reports that the Deep Learning Super-Sampling (DLSS) feature, which improves performance and image quality with the RTX 20/30 Series GPUs, is now available in the Mount & Blade II: Bannerlord and Nioh 2 games. - The Complete Edition thanks to these drivers. NVIDIA also announces that DLSS is now available as a free plugin for game developers based on the Unreal Engine 4 engine which will allow it to be extended to many additional games. A dozen professional authoring applications are also DLSS compatible recently.

Tom Clancy's Rainbow Six Siege sees its extended compatibility with Reflex technology, which according to NVIDIA would reduce the latency by up to 25% between an action on the mouse and its consideration on the screen. Note that activating Reflex mode is currently only possible on Ubisoft (Technical Test Server) test servers and only with the Vulkan edition of Rainbow Six Siege and not with the DirectX API. Of course, to enjoy these gains, you must also have a monitor and mouse compatible with Reflex but also a GPU GeForce GTX 10 Series or higher. In fact, NVIDIA points out that the latency gains are significantly greater with older generation graphics cards.

This 461.72 driver allows you to benefit from 25 additional Optimal Playable Settings (OPS) profiles, ie the ability to automatically optimize 3D settings for the following games :

Edit : Issue has been discovered on Win 7_8.1 where driver seems unable to install properly or isn't detected anyway.
Investigation in progress...
Edit Confirmed !!!
Windows 7.1, Code 52 in device manager, Error message in security log: Code integrity determined that the image hash of a file is not valid. This file could be corrupt due to unauthorized modification or the invalid hash could indicate a potential disk device error.
File Name: \Device\HarddiskVolume3\Windows\System32\drivers\nvlddmkm.sys

By the way this driver get several problems also on Win 10 with critical loss of FPS in certain games...and even on Ampere products.